The Angkor Small Circuit will take a full day to complete, with plenty to see and do.  All of the beautiful ancient ruins are located within the Angkor Archaeological Park which is only a short 6 kilometer ride by Tuk Tuk from Siem Reap.There are plenty of little local shops and vendors along the Small Circuit to buy cheap food, snacks, fresh fruit and cold bottles of  water. 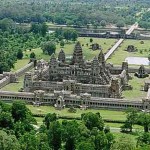 Angkor Wat was built in the early 12th century by King Suryavarman II as a temple city.  Surrounded by a 200 meter wide moat the site is roughly 2 km across and 2.5 km long with the central building covering about 1 km square.

You are free to roam all over the complex however you will have to queue up if you want to see the newly opened sacred central tower. Only 50 people at one time allowed up, waits are generally not too long, and it is worth the short wait. 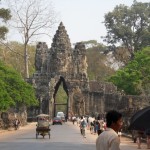 South Gate Angkor Thom
After leaving Angkor Wat travel a short distance up the road to the South Gate, one of 5 entrances to Angkor Thom.

Angkor Thom is another walled and moated temple city. Built by King Jayavarman VII in the early 13th century it covers about 3km square.

At the South Gate you will often see a line of elephants that are used to carry people up to the top of the nearby Phnom Bakheng temple which is a popular place to see the sunset or sunrise over Angkor Wat. 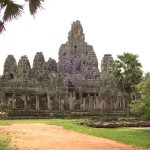 Bayon
After entering through the South Gate go straight forward to the Bayon, built in the 13th century by King Jayavarman VII as his state temple.

The Bayon is easy to explore and is covered in towers that have a giant face carved on every side. Spend a bit of time with this one, plenty of up and down stairways inside and some beautiful alleyways and colonnades. Look for the Buddha statue with the seven headed Naga.

Throughout the site are many carved bas-reliefs depicting everything from battles to scenes of daily life.

Just past the Bayon you will find a small temple called Preah Ngoc (Preah Ngok).

More a chapel than a temple, there is a 5 meter tall statue of a seated Buddha under a small pavilion.

While the pavilion is of recent times the Buddha statue comes from the 12-13th century.

Local monks can often be seen here conducting services at the site. 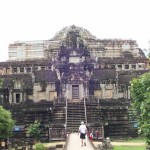 Baphuon – A few hundred meters north of Preah Ngok you will find the Baphuon.

Built by King Udayadityavarman II in the 11th century it is the second oldest building in Angkor Thom. The Baphuon is a large single temple mountain built over 5 levels. Parts of the main structure are undergoing restoration but you can still access the central entrance areas and wander all around the outer walls.

There is a 200 meter long elevated causeway leading to the front entrance. Hop down and look at the supporting columns underneath the causeway. This site will be truly magnificent once it is fully restored. 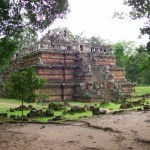 Phimeanakas – A few hundred meters further north of Baphuon you will find Phimeanakas, the oldest building in Angkor Thom, built in the 10th century by King Jayavarman V. A temple mountain that looks like a pyramid it is the tallest scalable temple in Angkor Thom.

There is a newly constructed set of wooden stairs at the rear that make for an easier climb, though still a bit steep.

Legends say that Phimeanakas was topped with a golden tower that housed a Naga serpent which transformed into a beautiful woman every evening. The Angkor Kings had to sleep with this woman every night lest great troubles fall on the kingdom. 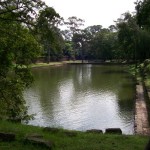 Sras Srei – Just north of the Phimeanakas is the area where the royal palace once stood. The stone walls that surrounded the palace are still mainly there however the buildings were mainly ornate wood structures they have long decayed.

What does remain are 2 bathing pools the largest of which is Sras Srei.

This pool is 125 meters long, 45 meters wide, and has terraced steps down all sides. The steps are ornately carved with lots of images of animals and marine life. A lovely shady and cool spot to stop for a rest on a hot day.

You may even find some of the local kids having a swim.

Built in the 12th century by King Jayavarman VII it is 300 meters long and 3 meters high.

If you walk along the front you will see all the types of animals caved into the stone face with some lovely carved elephants. The elephants also frame the sides of the staircases. At the northern end of the terrace is another terrace called the Terrace of the Leper King.

There are plenty of fruit and drink vendors opposite the Terraces if you are in need of refreshments. 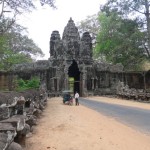 Leaving the Terraces behind you head east down the Royal Road to the Victory Gate.

Unlike the other walls that surround Angkor Thom, the east wall has 2 gates.

The Victory Gate and the East Gate. The East Gate can still be accessed down a seldom used rock and sand road to the south of the Victory gate. The gates are very tall, this was to accommodate a royal elephant with the King’s carriage and canopy on top.

Going through the Victory Gate is the main access to the other Angkor temples. 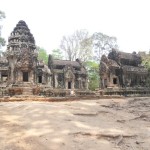 Thommanom – 500 meters past the Victory Gate the first temple on your left is Thommanom, built by King Suryavarman II in the 11-12th century.

A beautiful small temple it is in excellent condition due to restoration work 50 years ago.

Many of the carvings that adorn the temple are in very good condition.

This one is easy to explore, low to the ground, no heights.

It is set in a shaded jungle area that makes for some good photo shots. 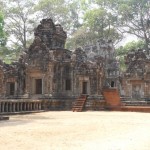 Like Thommanom, it was built by King Suryavarman II in the 11-12th century.

It is now being restored but you can still fully access the buildings.

A pretty temple with pink and orange stone walls and some good carvings.

From the temple you can go down the eastern walkway down to the river. 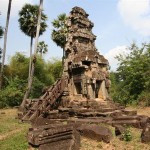 Hospital Chapel – About 200 meters further down the road is one of the few remaining Chapels of the Hospital in the area. This one is opposite Ta Keo.

It is a small sandstone chapel built by Jayavarman VII in the late 12th century.

The whole area was dotted with wooden hospital buildings for the sick and injured workers and locals with a small stone chapel or temple attached.

The hospitals themselves have long since vanished and only the chapels now remain. Small and easy to explore. 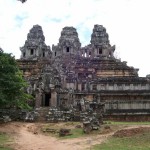 Ta Keo – Across the road from the Hospital Chapel is the huge Ta Keo.

A grand temple mountain built by King Jayavarman V in the 10th century.

Although not covered in a lot of carvings it is truly a magnificent structure. You can climb the steps all the way to the 5 towers at the top for spectacular views of the surrounding area, but, be a little careful, the stone stairs are steep. Stick to the sides and just go slowly.

As you go up you can stop and wander along some the terraces that go all around the structure. Well worth the short climb. 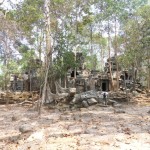 Ta Nei – While at Ta Keo go around the back of the building and take the East path.

About 1km walk up the sandy road you will find Ta Nei. This rarely visited temple was built by King Jayavarman VII in the 12th century. The main structure is partly intact and is broken down in some parts.

You will feel like Indiana Jones as you climb fallen stones and explore this peaceful jungle temple.

Some of the door lintels and wall carvings are in very good condition. 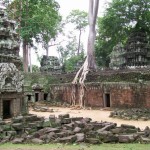 Ta Prohm – About 1km down the road from Ta Keo you will find the famous Buddhist monastery Ta Prohm. Built in the 12th century by King Jayavarman VII, in honour of his mother, this would have to be the most photographed temple complex after Angkor Wat.

Conservationist made the decision to leave this jungle complex only partially restored with all vegetation baring the huge trees being removed for easy access. The strangler fig and silk cotton trees that grow over the complex are huge and spectacular.

Ta Prohm is a big complex ruin and you can easily get lost within its labyrinth passages some of which are blocked by collapsed walls and ceilings. A beautiful place to explore. 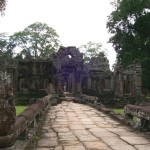 About 500 meters down the road from Ta Prohm you will find Banteay Kdei.

This is another Buddhist monastery built in the 12th century by King Jayavarman VII.

Similar in style to Ta Prohm although not of the same quality. It is well cleared and has undergone restoration in parts.

It is a large rambling complex that you can wander around. 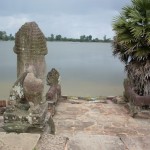 Sras Srang – Across the road from Banteay Kdei is the “small” man made lake Sras Srang.

Built in the 12th century by King Jayavarman VII the lake is some 700 meters long and 350 meters wide. If the water levels are low you can see the remains of a small island temple in the middle of the lake.

The western side of the lake opposite Banteay Kdei has a multi level stone platform that would have been used when launching boats on the lake.

Good alternate spot to see the sunrise if you don’t see it over Angkor Wat.

Sras Srang is the last place to visit on the Small Circuit today, now we go back to Siem Reap. If you want to see more about my Angkor Tours and other places to visit, go to my Tours page. I hope you enjoyed your trip around the Angkor Small Circuit.